Miamisburg, OH (USA) December, 2016 – The process of creating signs and displays is becoming more sophisticated, while the demands to keep up with faster wide format inkjet printers has forced companies to re-assess how they manage their workflow. Esko reports that Impulse Graphic and Display Solutions Inc. (Impulse), has successfully installed Automation Engine to reduce operator time, automate step & repeat layouts to their printers and Kongsberg cutting tables. In addition, Impulse has invested in Esko ArtiosCAD to add structural design capabilities to its wide range of services.

Founded 40 years ago and based in Mississauga, Ontario, Impulse Graphic & Display Solutions is a leader in retail in-store marketing, display and POS. From strategy through deployment the company's 35 employees are valuable partners with the people, expertise and infrastructure to make the most of in-store print and display requirements. They are a comprehensive one-stop shop, offering project management, creative solutions, printing, kitting and warehousing, and shipping and installing.

Digital printing brought tremendous flexibility and capability to retail marketing and display work. In 2007, Impulse invested in a high-volume flatbed printer, recently added a new hybrid printer to boost its printing capacity to over 7,000 sq. ft. per hour and has invested in their third Kongsberg cutting table. "We felt the need to have the same family of cutting tables, moving away from another cutter brand to create consistency and greater throughput in our bindery department," remarks Alexander Cachia, Impulse President. "Kongsberg tables are robust and very reliable, and cutting and printing files can be coordinated between the workflow, press and finishing table."

Impulse was also looking for versatility. "We wanted to customize our workflow based on the scope of work. That is something we identified Automation Engine could do better when compared to other systems we looked at," recalls Cachia. “We also wanted our creative department to take advantage of other software tools Esko offers that tied into prepress. With the implementation of Esko ArtiosCAD we now have the ability not only to create structural designs in 2D or 3D, but also link these files to Automation Engine to output to our printers and to the Kongsberg tables. This make the prepress operation very seamless."

Until recently, Impulse was receiving job files from ftp sites and manually sending them through a pre-flight program. One-ups were manually stepped and repeated in Adobe Illustrator, and a separate layer was created for a cut line. Once approved, the files were sent to the digital printers and cutting tables. "With a growing customer base, some of which operate more than 3,000 locations across North America, we needed a powerful tool to automate our workflow." comments Cachia. "Our most pressing need was that we wanted to reduce prepress operator time, especially for repetitive tasks."

The Automation Engine implementation went very well. "I would say from the day we finalized the agreement and set the implementation dates, we were running in under a week," says Cachia. "We also trained our staff very quickly. Since we had operated Esko i-cut layout before, we were pretty familiar with what to expect. Also, Esko came in and put everything we needed to do into perspective."

Impulse has been using Automation Engine for about four months. "Because of the type of client we have, we handle on average 100 files a day. We recently completed a project where we processed over 800 files through Automation Engine on a variety of substrates" explains Cachia. "Automation Engine is strong, robust and reliable enough to help us manage these kinds of file management operations. We often have to work with multiple versions based on language, pricing regions, product offering and other variables. Automation Engine helps us plan out the output more efficiently."

In the past Impulse used to create a variety of templates to step & repeat and output jobs. The company's key operators have customized them all within Automation Engine. What took 15 minutes per job before is now fully automated. "The operators are more efficient. We can accept larger jobs and turn them around faster," offers Cachia. "Prepress used to be the bottleneck. Now it's pushing production."

Automation has given Impulse a comfort level to think outside the box—how to lay things out better, be more cost efficient in reducing waste and take on more complex jobs. "A lot of things help us, even when it just comes to efficiency and the way things are laid out or grouped," acknowledges Cachia. "We are pushing the system. In today’s world, delivery times are measured in hours and not in days. Automation Engine allows us to meet deadlines more efficiently." 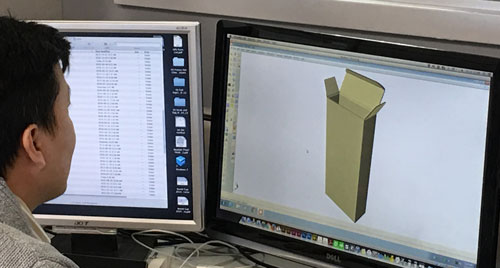 Adding structure design to their work

In addition to Automation Engine, Impulse has invested in ArtiosCAD. The need came about when they partnered with an agency that was involved in creating POP corrugated displays. It drew Impulse to seriously consider and identify the potential of having ArtiosCAD as they saw an opportunity to offer structural design to their existing clients and prospects. "We looked at the user interface and the potential of the software — and within four months we went from due diligence, ROI analysis to installation. Structural design is a new service we are offering. As we gain more experience we plan on developing our own line of products. As displays becomes more innovative so must we." Cachia points out.