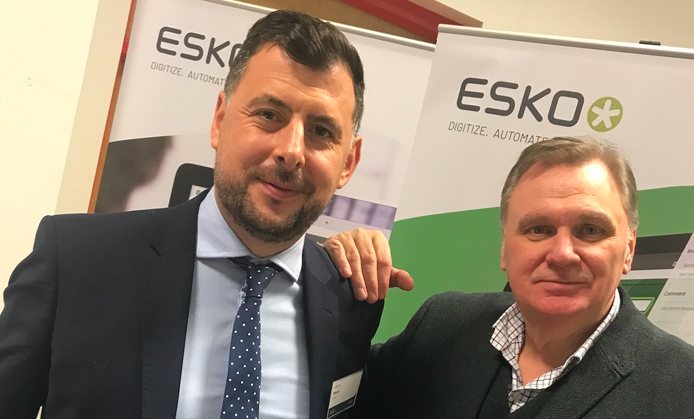 Teamwork. A cynic might dismiss it as a word that mostly appears on inspirational posters in break rooms. Or that will undoubtedly be used when recruiting (and indeed applying) for a new position. But teamwork is also the key to many a business’s success – something that Steve Mulcahy, CEO of Contact Originators Group, was keen to point out to industry colleagues who attended the recent UK leg of the Esko Innovation Summit.

“When I first started work as a teenager, I joined a circus,” he told Esko Regional Business Director James Mason, during his hugely entertaining interview. “I was working with everybody else at the circus, and was looking after the animals – including the lions and the elephants. This taught me the importance of everyone working together as a team.

“Knowing your own job and responsibilities and making sure that you did everything correctly was how you ensured the whole team could perform well,” he said. “Aside from the risk of being bitten by a big cat, the same applies to our industry.”

Renowned for its innovative approach to packaging origination, graphics management and flexographic plate production, Contact Originators was devastated by a fire that ripped through its Stockport premises in January 2020. Steve explained that the teamwork of his employees and partnership with his customers and suppliers like Esko, ensured the business continued uninterrupted and played a key part in successfully establishing a new state-of-the-art 32,000 sq ft site in Greater Manchester.

“There was a lot of synergy during that time – and in the way we work now – with what I’ve been hearing at the Innovation Summit,” said Steve. “Technology and teamwork are key to success today. Looking at topics like ‘sustainability’ and ‘automation’, we saw that the industry has evolved so that now is the time for all of us to focus on waste. Not just physical waste but also energy use, ensuring sustainability through the supply chain,” he said. “Working with partners and investing in technology are integral to making that happen.

“We’ve been working together with James and Esko to establish internal digitally managed workflows at our new facility,” said Steve. “We have two Esko CDIs, each linked directly to an XPS, which are then linked to plate washers, delivering us an incredibly efficient flow process. We now have total visibility and connectivity, so we can access and share live data with customers and locate plates in almost no time, which enables us to work more closely with our customers and respond to their particular needs quickly and efficiently.

“That’s why we have partners. We don’t need ‘suppliers’, where a relationship is driven by price, or need. We want partners,” said Steve. “Esko listens. They have become more adaptive to the issues we face, but perhaps more importantly, they understand the issues our customers face. And that’s why we continue to work together, as the need to evolve never ends.