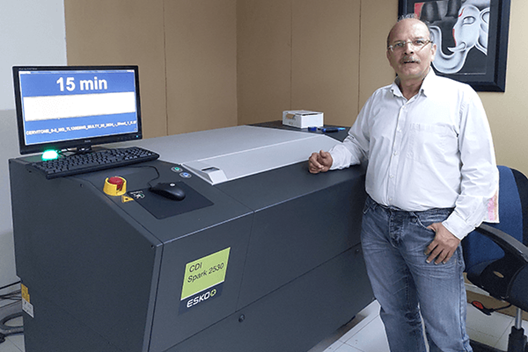 The printer of self-adhesive and wet glue labels, which uses five narrow web flexographic presses at its Navi Mumbai plant, has acquired an Esko CDI Spark 2350 and the Flexo Tools software for its in-house plate room.

Part of TM Enterprises, a leading printer of playing-cards for over three decades, KEM Cards was previously outsourcing the plate imaging part of the pre-press operation to third party vendors. It had a plate making department in-house that was used to process the digitally imaged plates as well as to produce conventional film based analog plates.

“There was a push from our clients to have an imager so that the complete digital flexo platemaking process comes in-house,” said Haresh Rajani who founded KEM Cards almost two decades ago. “That is why we went for the solutions from Esko. Also, the market for analogue technology was shrinking. The decision to invest in an Esko CDI was very easy for us as we already had a high-quality plate making unit at our plant. The whole set up was a breeze,” says Rajani.

He said KEM Cards, which produces labels mainly for beer brands and pharmaceutical companies, had enjoyed a marked improvement in quality and the ability to take on short notice jobs since acquiring the technology from Esko, a global provider of integrated hardware and software solutions.

With the whole plate making process now in-house, Rajani says that the company is completely independent of any other 3rd party operator. “If a customer wants labels produced at very short notice, we can do it now,” said Rajani. “I now realize we should have gone for the Esko plate imager much earlier.”

In addition to making the flexo platemaking process seamless, the Esko CDI has also enhanced the quality of flexographic printing at KEM Cards. “In the case of half-tone jobs there has been a marked improvement in quality. For four-color photorealistic images the output is much better than that of the analog process,” Rajani adds.

“The use of digital plates helps in shortening press set-up time due to the high and consistent plate quality. Digital plates result in less spoilage and longer cleaning intervals, which in turn leads to higher press utilization – and savings in the printing department.”

Based on the FTA and GATF award-winning technology of the CDI, the CDI Spark 2530 specifically addresses the tag and label market, folding carton and small volume flexo plate producers in general. Two productivity levels are available for the CDI Spark 2530: Optics 15 (1.5 m²/h) and Optics 25 (2.5 m²/h) which images a full size plate of any thickness in just 12 minutes. The CDI Spark 2530 imager comes with an EasyClamp for fast and convenient plate loading on the vacuum drum.