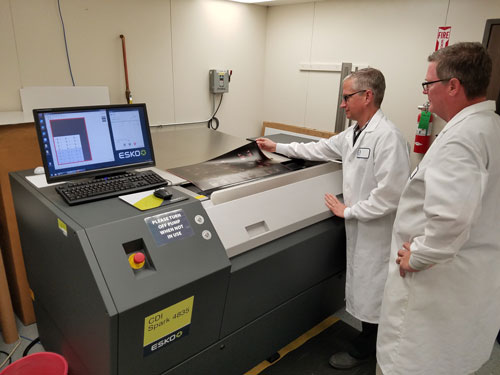 Ghent (Belgium), October 02, 2018 – Prodded by a customer to look into flattop dots, Prairie State Group invested in an Esko CDI Spark 4835 flexo plate imager with Full HD and Pixel+, along with a MacDermid LUX® In-the-Plate™. Not only has gravure-like quality exceeded expectations, but the system has become easier and faster to use, both in the plate department and on press.

Based in Franklin Park, IL, Prairie State Group (PSG) provides collaborative flexible packaging solutions, ranging from mid-web laminated products such as stand-up pouches and bar wrappers through to pressure sensitive labels. They are one of four printers in the world with SQF (Safe Quality Food) Level 3 Certification. They are a full-service printer, with in-house pre-press along with a complete Esko workflow, platemaking, and a creative services department.

PSG’s flexo plate imager was not capable of creating flattop dots, fades in highlights, and shadows to meet market demands. It wasn’t until a client requested flattop dots, though, that they reached a tipping point. “We wanted to wait until we knew where the technology was going,” remembers Dan Doherty, Executive VP of Operations and Principle.

PSG evaluated imaging systems from their former supplier and Esko. “The other system, with an extra, second film layer processing step, required more equipment and labor. No one in our plate department wanted to add another step. Esko’s system was much simpler to operate. With a full Esko front end, we knew that an Esko partnership would mean excellent support and training,” adds Doherty.

APR and Esko provided the installation and training, which went very smoothly. “They were here two and a half days and helped us determine our standard dots and the configurations—and still returned to check up on us. Cayleigh Anderson, responsible for Business Development at All Printing Resources, regularly supports us,” says Doherty.

“The greatest benefit is the ease of setting up files. Our minimums are rarely a concern anymore,” explains Charles Strezo, Lead Prepress Technician. “Our prepress department is less concerned about challenging jobs, and we are willing to raise the bar without all of the preparation. We just let the screens fall where they are, which, in turn, accelerates our output.”

“HD Flexo and Pixel+ did what Esko promised it would do. We love the solids—on both labels and films. We have also eliminated problems with trailing edges,” comments Randy Crutchfield, Pressroom Manager. “Esko mentioned that we would have wider latitude on the press. It’s a noticeable difference. We are able to lay down a good coating of ink—a nicer, softer impression touch on press. Make-ready time and waste have decreased and we now have more uptime. While there are many variables, we believe that our new plates are helping.”

“With our new imaging system, line colors in the type and backgrounds look a lot better than before,” explains Tom Peters, second shift Supervisor. “Also, at the end of a roll, the process looks exactly the same as when we started. We don't find any dot gain or hue change, and dots stay cleaner. We do not get as much swell on plates because there is not as much pressure on them. Our press operators are much happier.” 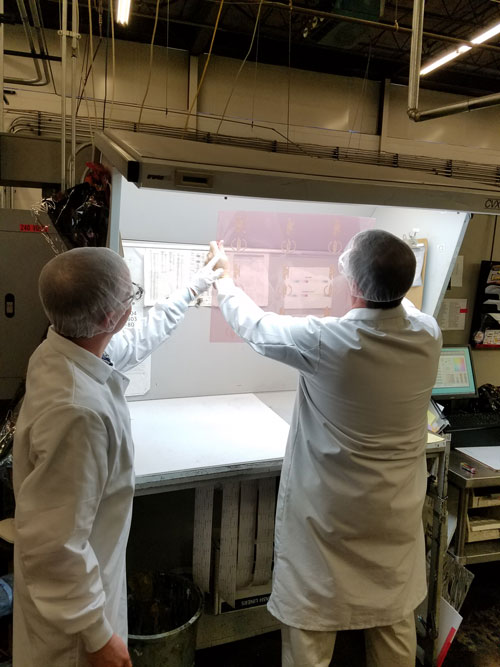 “The first job PSG printed with the new CDI was perhaps the most challenging one they ever ran. It contained an ombre effect of four-color build fades from left to right and from the top to the bottom,” recalls Anderson. “Without the new CDI, we would not have been able to produce the job successfully. There would have been lots of banding, steps, and hard edges.”

“Our Spark CDI with HD Flexo and Pixel+ has been a great marketing tool to differentiate ourselves,” notes John Reinhardt, Marketing Director. “Our investment in CDI technology has given us immediate credibility. We even printed a package for PackExpo with 1-point type on the back. People couldn't see it without a loupe.”

“New technology is a beautiful thing,” adds PSG president, Graham Redding. “We can provide gravure-like quality at flexo costs. That gets people’s attention.”

“Our CDI imager with HD Flexo has been a game changer. It has allowed us to take work away from rotogravure. We are a better printer because of the investment,” concludes Doherty. “When press operators with 15-25 years of experience come and say they love the plates, you know you have spent your money in the right place.”