Scaling up with Esko’s ArtPro and Automation Engine

Skanem Interlabels automates prepress across its three plants in India

Mumbai (India), October 4th, 2017 – Skanem Interlabels India, is part of the Skanem Group. With their HQ in Norway, Skanem Group has been in business for over 110 years and has 13 production sites across 9 countries.  As part of the Group’s strategy of digitalisation, Skanem Interlabels India has upgraded its prepress with Esko’s ArtPro and Esko’s Automation Engine software at the Vasai plant which has a fleet of flexo, letterpress and digital presses. It also extends prepress support to the Baddi plant in North India and the Guwahati plant in North-eastern India.

For Skanem, cutting edge prepress software tools that are recognized and serviced globally are just the beginning. The day-to-day efficiencies of industrial strength software must lead to faster and better press utilization in its plants across India. With top notch industrial strength prepress software, Skanem is working to increase production quality and quantity and to reduce turnaround times. 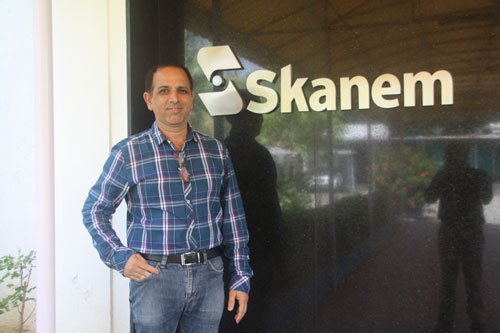 Mr. Kamal Sharma, Operations Director at Skanem Interlabels India says, “ArtPro is a quality control tool that helps packaging and label professionals by detecting potential problems at an early stage. Any element in the artwork that doesn't meet the requirements is highlighted, enabling the operator to quickly find and fix it before sending for print.”

With the Esko Viewer in ArtPro, an operator can view and compare separations just as if they are inspecting the final plates. The separation files are visible in high resolution, reducing the risk of wasted proofs, plates and press downtime.

Additionally, with the installation of Esko’s Automation Engine, Skanem has streamlined its entire file management process and automated job tracking and prepress functions in a common workflow across letterpress, flexo and digital presses. Automation Engine allows users to pre-set and automate repetitive tasks and decision making within the workflow to reduce operator interventions and errors, thus improving production efficiency.

Skanem is a leading producer of self-adhesive labels, with 13 production sites across 9 countries in Europe, Asia and Africa. Skanem Group has been in business for over 110 years and offers labelling solutions across all market segments. Skanem Interlabels India has recently opened a new plant in Guwahati in Eastern India to provide the responsive pan-India coverage that consumer product companies require. Skanem Interlabels India also manufactures automatic labelling machines, at 2 state of the art manufacturing facilities in Vasai and Baddi.