As four companies become one, the new CDI produces the quality PlateCrafters customers need for high-end printing, particularly for pharmaceuticals 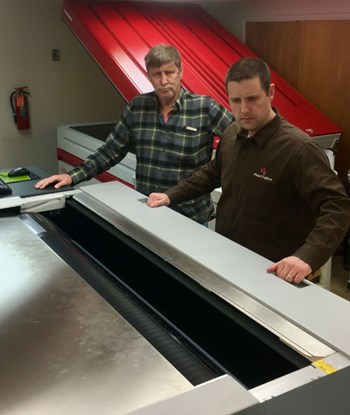 Colmar, PA-based PlateCrafters is a family owned business founded by C.J. Spering, in 1971. Today, the company’s three locations, managed by third-generation owner Anthony Spering, serves every industry, providing quality prepress services including flexo polymer and rubber plates, digital arts, and stamping dies. Their plates are used for everything from wide web bags, blister packaging and corrugated boxes, to high-end 200 line screen labels. Para Print, gave PlateCrafters a powerful footprint in pharmaceutical packaging, as one of only two trade shops nationally that is prepared to pass pharmaceutical quality audits. “We have grown so much with our acquisitions that we needed to invest in the latest platemaking technology to keep up with demand,” says Spering. “We also needed to offer our customers—particularly for their pharmaceutical work—a high-quality reproducible plate that could hold fine print. With the audits we handle, we can’t afford to produce a rejected plate. It was critical for us to create a perfect plate every time.”

For more than a decade PlateCrafters has used an Esko front-end workflow utilizing Automation Engine and numerous other Esko Suite components. So, an Esko CDI was one of the flexo plate imagers that PlateCrafters considered as an investment. “The CDI imager along with Esko’s reputation and knowledge of the industry was critical. We also knew it would integrate well with our current workflow system,” assessed Spering.

“From our Para Print acquisition, we were able to evaluate an older CDI and call on personnel for their opinions,” recalls Spering. “The CDI is reliable, producing the same results every time. We felt secure that, investing in a CDI, we would be able to satisfy the quality requirements of any pharmaceutical company. It was also the best solution to work with the latest DuPont plate technologies. The CDI Spark 4260 imager, with 4,000 dpi., just made the most sense.

“Agfa Graphics, our reseller, coordinated everything wonderfully, including the purchase of a new DuPont Cyrel 2000 ECLF plate exposure unit to ensure we were getting the most out of the CDI,” adds Spering.

PlateCrafters received the CDI between Christmas and New Year’s Eve. “Esko coordinated delivery and on-site technical support during that awkward week to accommodate our schedule and logistic challenges,” remembers Spering. “The CDI was up and running very quickly. Even on day one, without Esko Flexo Implementation and Quality support, we were making plates. We didn’t need to tweak much at all. The transition to the CDI has been seamless. We just flipped on the switch and didn’t look back. We started all our work on the CDI.”

PlateCrafters has been using the system for about two months. “The plate quality and the crispness of 4,000 dpi resolution—combined with the latest DuPont flat top plates—produce a dot that, when looked under a microscope, we have never seen before,” exclaims Spering. “We are holding down a .2% percent dot. While no one could print that, they are holding on our plates. We are updating our curves to hold a much smaller dot than we have held and are confident that our highlight dots are much cleaner and the drop off much better than even the excellent plates we produced in the past. Because we can also image a larger plate, we have the ability to produce more with fewer flats—which adds capacity.”

“That, plus our DuPont plate technology, offers an exceptional plate with flat-top dots and lets our customers compete with any other form of high-end printing,” adds Spering. We are still in the early stages of demonstrating to our customers what we can now provide them, but the initial responses have been ecstatic.”

“Many of our customers are flexo printers competing against gravure, offset and digital,” concludes Spering. “The Esko CDI is a great tool that meets the quality plate requirements our customers demand. In order to compete with other print processes we needed this type of equipment to offer a level of plate quality that is very difficult for any printer to produce in-house.”