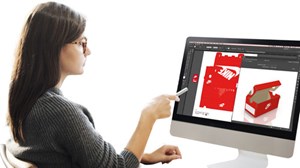 Nike was seeking a tool that was compatible with Adobe® Illustrator® and could save time in creating high quality 3D design images. Esko’s Studio, a unique set of tools for 3D packaging design made specifically for packaging artwork professionals, has led to significantly improved efficiency for Nike, with over 80% time saved on creating high quality 3D images. It has also seen an increase in team productivity and collaboration.

“I realized very quickly that Esko had figured it out – this is something I have needed over the last 10 years,” said Matt Maghan, Global Apparel and EQ Packaging Designer, Nike. “We definitely save time and it has brought a significant increase in our productivity. Something that would have taken two, three or four hours of Photoshop® work, only takes about 10 minutes.”

Studio is a modular solution, a mix of plug-ins and applications that work tightly together and integrate seamlessly with essential design tools like Adobe Illustrator. Adobe has recently launched Creative Cloud® 2018, with new Illustrator, Photoshop, InDesign and more. Esko has subsequently released new versions of all its plug-ins to support Adobe’s new version of Creative Cloud®. All of Esko’s Adobe Photoshop and Illustrator plugins – including Studio – are now completely compatible with the new version, helping designers to accelerate their packaging design.

Giving designers time to focus on what matters

Studio takes care of the technical aspects of packaging, including bar codes, nutrition tables and so on, so that packaging designers can focus on what matters most to them – the creative aspects. It does so in a way that is very intuitive and user-friendly.

“There is not a large learning curve with Studio,” said Matt, “especially when you already know Illustrator. I picked it up probably within an hour. What I really enjoyed is the Studio part of it, building the package. In my work, I don’t just deal with one sheet of paper that folds up into a box, they all have trays, lids and everything. So I go into Illustrator, build out my ArtiosCAD files, and build them in Studio, which I always find fun to be hands on with it, then load that into Illustrator. I can show my clients my ideas very clearly.”

Studio is a fast and easy way to turn ideas into 3D images, whether for inspiration in the design process, to impress internal clients, or to help make key decisions more quickly.

“Being able to build those scenes of what exactly I am looking for and then import that back into Illustrator using my flat die-line art has probably been the biggest game-changer for me,” said Matt.