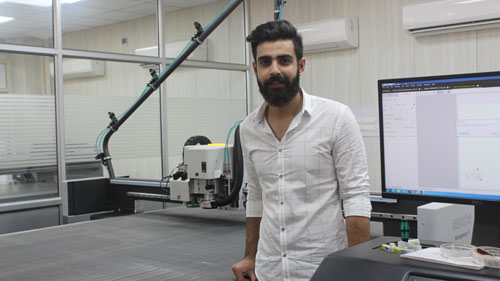 “We now entirely rely on the Kongsberg X24 digital cutting table for short-run production. It’s not just a sample-making table but also a production machine for short-run jobs. For 300 to 500 products, we no longer have to make dies as we can now directly process, cut and crease the products on the table,” says Mr. Sanjay Nagpal of Azure Press.

The X24 features a MultiCUT tool head offering milling productivity and a camera system. The table also comes with a LubriCool tool that sprays a light layer of oil to cool difficult substrates like aluminum and assure a good clean cut. “Operating the digital cutter is simple. Even a layman can become an expert with just three to four days of training,” says Mr. Nagpal. “This is the first time that we have installed a digital cutting table and we have come to understand the technology and its benefits. We thank the team at Esko for supporting us and helping us choose what was the most suitable for us.”

The Kongsberg X24 was launched at drupa 2016, where Mr. Nagpal and his son saw the clear advantages and benefits of this industry leading solution in comparison with other systems. The Kongsberg X24 comes with advanced tooling, a camera registration system, high-powered milling system with LubriCool for high-speed milling and better bit life. “With Azure Press looking at making a mark in the digital printing and finishing segment, they found the Kongsberg X series a perfect match for their future needs and production requirements. In addition, the Esko Kongsberg X series is upgradable to advanced automation systems,” says Mr. Talwar.

About Esko’s structural design software ArtiosCAD, Mr. Nagpal says, “ArtiosCAD has helped us not only on the design front but also in terms of saving precious time. The productivity of our packaging designers has also increased. Designing a rigid box is not as simple as it seems as the accuracy required is in microns. So ArtiosCAD was the obvious choice for us.”

“We are extremely happy with the Azure Press installation of India’s first Kongsberg X24 cutting table with MultiCut-HP head. Azure Press is an innovative printer and we are delighted to see them choose Esko as their trusted partner,” concludes Mr. Talwar.